Post-Trump superstars are all ‘China hawks’ on America’s right NEW YORK — “Send in the Troops.” With his New York Times op-ed calling for military intervention to protests across the U.S., Republican Sen. Tom Cotton thrust himself into the media spotlight right on the eve of the 31st anniversary of the Tiananmen Square crackdown.

Though his claim that “the basic responsibility of government is to maintain public order and safety” echoes talking points of Beijing, the lawmaker from Arkansas happens to be one of the loudest China hawks in Washington, alongside fellow Republican senators Josh Hawley, from Missouri, and Marco Rubio of Florida.

In recent memory, their names have appeared without fail whenever an occasion to censure China rises, often accompanied by inflammatory language and drastic proposals which sometimes get picked up by the White House — think Rubio and Cotton’s bill on delisting Chinese companies citing compliance, and the latter’s recent call to restrict entry of Chinese graduate students and researchers for the sake of national security.

The trio have introduced dozens of bills that target China, on subjects ranging from human rights in Hong Kong to viral video platform TikTok, owned and operated by Beijing-based Bytedance, sometimes working together.

And as a Cold War narrative around U.S.-China relations continues to gain clout near the end of Trump’s first-term, the trio have risen in their conservative stardom, most recently getting a boost from the coronavirus pandemic.

Tom Cotton was known for advocating military strikes against Iran before turning up the volume on his China criticism.

“Republican senators most widely seen as preparing to run for president in 2024” — Cotton, 43, Hawley, 40, and Rubio, 49 — “all criticized the Chinese government for lying about the coronavirus as it spread throughout the world,” wrote Matthew Continetti, resident fellow at the right-leaning think tank American Enterprise Institute.

“Youthful and heterodox” in the words of Continetti, it was these young members of the Republican Party who “first recognized the severity of the challenges emanating from Wuhan, China.”

As the U.S. death toll from the virus continued to climb, the trio ramped up the “blame China” rhetoric, introducing several bills aimed at penalizing China over the coronavirus as well as reducing U.S. reliance on the country’s medical supply chains.

Hawley, the youngest of the three — and of all U.S. senators — was also the first in Congress to publicly ask Trump for a travel ban on China, an action the president now repeatedly uses as proof he acted swiftly in response to the pandemic.

The latest display of the parallels between Hawley and the White House on China came last month when he gave a nearly 20-minute speech on the Senate floor lambasting Beijing, just hours before the White House released its 16-page report on its strategic approach to the Asian rival, accusing China of seeking “to transform the international order to align with [the Chinese Communist Party’s] interests and ideology.” Josh Hawley, the youngest lawmaker in the Senate, has labeled China an “imperialist.”

“The international order as we have known it for 30 years is breaking,” Hawley said, using language akin to that in the White House report, before adding some extra flavor. “Now imperialist China seeks to remake the world in its own image, and to bend the global economy to its own will.”

The Stanford- and Yale-educated son of a banker, who is often noted for his “war on Big Tech,” has been on a meteoric rise to prominence since — or even before — his arrival on Capitol Hill in January last year.

“Josh is a star. There aren’t many of them,” Trump said before the Missouri native’s upset victory in the 2018 senate race.

The U.S. president also took a liking to Cotton, who comes from the small heartland town of Dardanelle, Arkansas, population 4,575, via a double-Harvard education and a stint in the Iraq War.

Cotton, who assumed office in 2015 after a term in the House of Representatives, was reportedly Trump’s top pick just two years later to replace now Secretary of State Mike Pompeo as head of the CIA. The thin-lipped, stern-looking senator was known for advocating military strikes against Iran, before turning up the volume on his China bashing around 2018.

In a speech at the Hudson Institute early last year, Cotton called China an “evil empire” that is “purging every vestige of its subjects’ freedoms at home to pave the way for its economic, military, and political expansion abroad.”

Hawley and Cotton’s senior Rubio, the son of Cuban immigrants carrying a deep disdain for communism, has had a longer career as a China hawk. He was first appointed the co-chair of the Congressional-Executive Commission on China in 2015 and later chairman in 2017, the year when Cotton joined the agency.

Though Rubio would trade insults with Trump when they were rivals in the 2016 Republican primary, the two shared a disapproval of Washington’s efforts to engage China under President Barack Obama and other prior administrations. 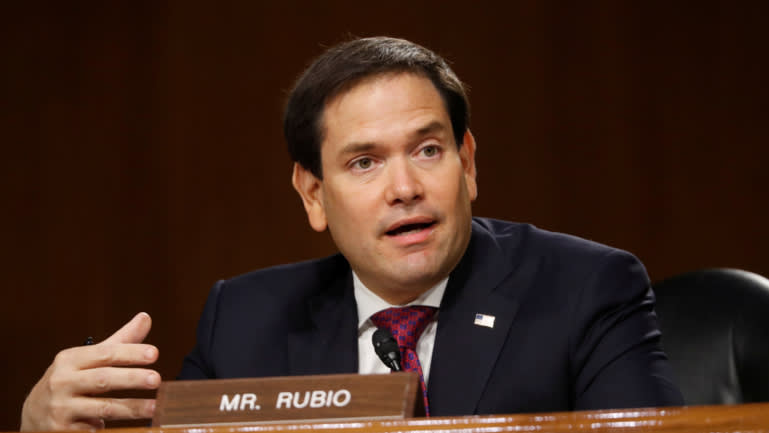 Marco Rubio has called for state support of U.S. industries such as manufacturing to counter Beijing’s policies.

“Too many of our political and business elite have been content with the status quo in China, especially as it relates to the denying of basic human rights and liberties,” Rubio said in 2015 when he chaired a hearing coinciding with the anniversary of the Tiananmen Square clampdown.

“In fact, U.S. policy has aimed at engaging with the Chinese Communist Party, surrendering American leverage and principles,” he said.

While advocating for a decoupling from China, Rubio also wants the U.S. government to adopt an industrial policy to counter Beijing’s state capitalism.

Like Hawley’s career-making attacks on such Silicon Valley giants as Google and Facebook and his frequent calls to rein them in with regulation, Rubio’s push for state support in industries such as manufacturing is seen as going against the Republican Party’s free market orthodoxy.

But as Rubio sees it, China’s history of unfair trade practices demands a U.S. response in kind.

“Chinese leaders kept subsidizing their domestic industries while undermining ours,” Rubio, who is also chair of the Senate Committee on Small Business and Entrepreneurship, said in a December speech at the National Defense University.

“In the long run it is a competition that market fundamentalists won’t win,” he warned.

After all, “this century will be defined by the relationship between the United States and China,” Rubio said. “The stakes could not be higher.”