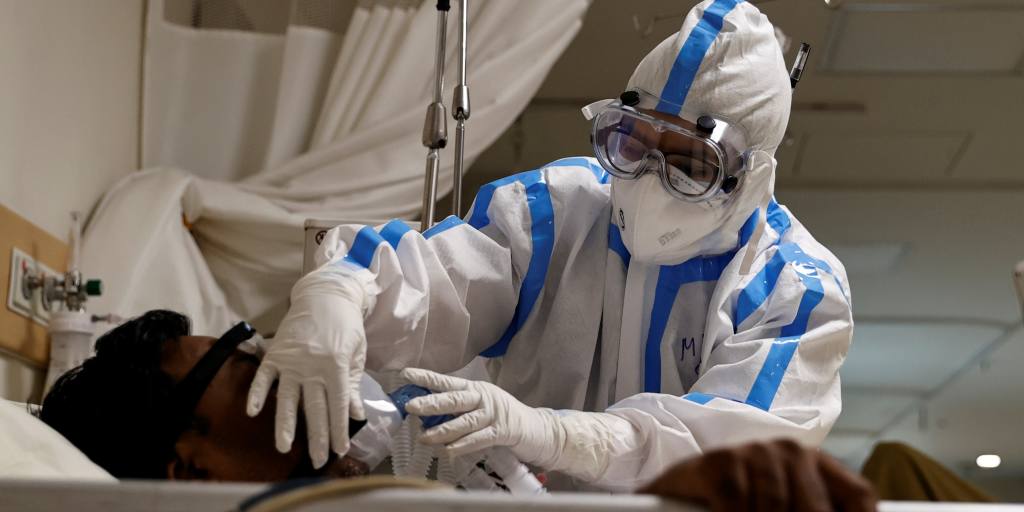 The Nikkei Asian Review is tracking the spread of the new coronavirus that originated in the central Chinese city of Wuhan.

Global cases have reached 6,131,531, according to Johns Hopkins University.

To see how the disease has spread, view our virus tracker charts:

8:20 p.m. India has reported over 190,000 cases of coronavirus, making it the 7th worst-hit country behind the U.S., Brazil, Russia, the U.K., Spain and Italy, according to Johns Hopkins University.

7:20 p.m. New Delhi has allowed barber shops and salons to reopen, and is lifting the restriction on the number of passengers in private and public vehicles as the country starts to exit from a lockdown imposed on March 25. Delhi, India’s third worst-hit state with nearly 20,000 confirmed cases of coronavirus, sealed off its borders for a week amid a continuous rise in infections.

7:00 p.m. The Philippine health authority is planning to validate around 6,800 positive coronavirus tests in the coming days, to try to provide an accurate picture of the pandemic’s progress in the country, the Manila Bulletin reported. A senior health officer, in a virtual press briefing, said that the department was dealing with around 6,800 unvalidated test results now.

The authority reported 552 new cases in the country on Monday, bringing the total to 18,638.

6:28 p.m. Citing public health concerns, Hong Kong will ban candlelight vigils in Victoria Park on the anniversary of China’s brutal crackdown on pro-democracy protesters in Tiananmen Square on June 4 1989. This is the first time since 1990 that the vigil has been banned.

Activist Lee Cheuk-yan said the government was suppressing pro-democracy movements under the pretext of social distancing rules. The coronavirus outbreak has largely been brought under control in Hong Kong, with only a handful of new cases reported in the past weeks.

Hong Kong’s retail sales in April dropped 36.1% on the year, as the outbreak weighs on tourism and local consumption, marking the 15th consecutive month of decline.

5:00 p.m. Japan’s government plans to negotiate with its counterparts in Thailand, Vietnam, Australia and New Zealand to lift entry bans on travelers from the four countries, which have strong economic ties with Japan and have largely brought their outbreaks under control. Japan is considering a phased approach in which business travelers would be allowed back first.

3:00 p.m. Japan’s stock benchmark rose to a three-month high on Monday as U.S. President Donald Trump’s threats against China over new security laws for Hong Kong were less threatening than feared. The Nikkei average gained 0.8% to 22,062.39, its highest close since Feb. 26. 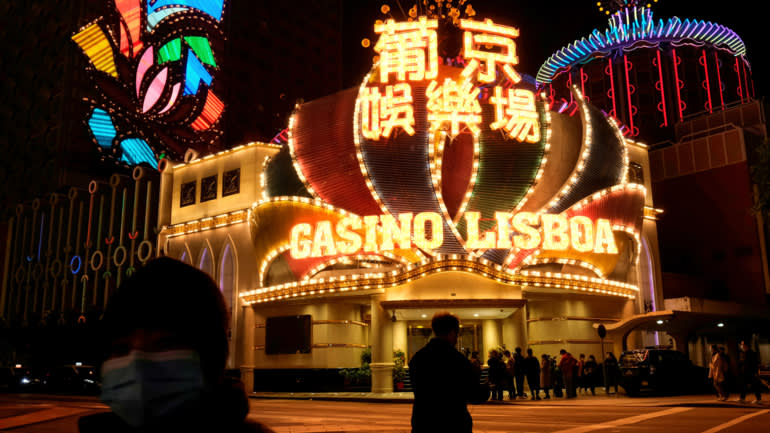 The Casino Lisboa in Macao is visible on Feb. 4 before its temporary closing due to the coronavirus pandemic.

2:40 p.m. revenue in Macao slid 93.2% in May from a year earlier due to coronavirus-related restrictions in the world’s biggest casino hub. The 1.76 billion patacas ($220.4 million) in revenue for the month came after a 96.8% plunge in April.

2:00 p.m. Universal Studios Japan says it will reopen on June 8 but only to Osaka residents who have an annual “passport.” All Osaka residents will be welcomed beginning June 15, and on June 19 residents of five nearby prefectures will be allowed into the park. Meanwhile, Tokyo Disneyland and Tokyo DisneySea have extended their closures again, setting no specific reopening date. Schools in Tokyo reopened on Monday after a three-month closure due to the coronavirus outbreak. They are still taking precautions, limiting attendance numbers to prevent a second wave of infections.

11:50 a.m. Public schools resume in Tokyo after a three-month closure, while the capital allows businesses such as shopping malls, gyms and movie theaters to reopen. Schools are still taking precautions, such as limiting attendance numbers, to prevent a second wave of infections.

10:27 a.m. South Korea reports 35 new cases, up from 27 a day ago. Total infections reach 11,503 with 271 deaths. Preschools in the country’s provincial regions reopen today, while the government plans to announce its third extra budget soon.

10:20 a.m. Tokyo begins random antibody tests on about 3,000 volunteer residents. Some of the antibody tests are underway in Miyagi Prefecture north of the capital, while Osaka further south will start testing from Wednesday.

10:00 a.m. China reports 16 new cases for May 31, the highest since May 11 and up from two cases a day earlier. All the cases came from overseas travellers. There were 16 new asymptomatic cases, compared with three a day earlier.

9:50 a.m. South Korean exports tumbled in May for the third straight month, though at a slower pace, as extended global lockdowns weighed on global demand. Shipments contracted 23.7% year on year in May, slower than the 25.1% drop in April.

8:55 a.m. Capital spending in Japan rose 4.3% in the January-March quarter from a year earlier. Investment by all nonfinancial sectors for factories, equipment and similar expenditures totaled 16.35 trillion yen ($152 billion). 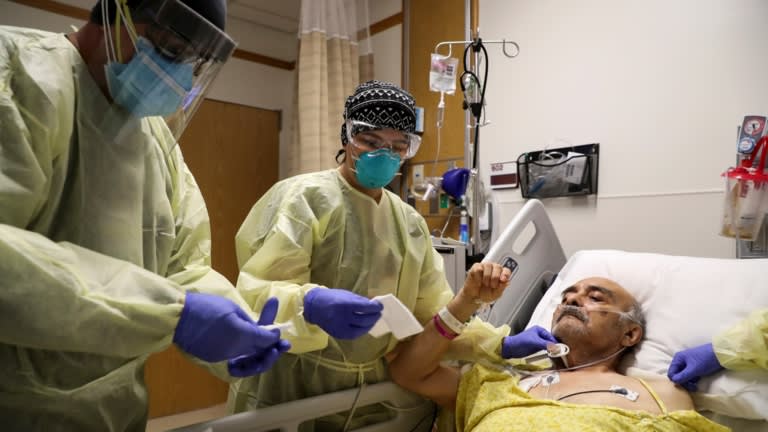 A COVID-19 patient in an intensive care unit at a hospital in Los Angeles, California on May 40.

5:30 a.m. Seven out of 10 Japanese companies with domestic plants will revise their supply chains, a Nikkei survey shows, highlighting corporate efforts to find a new normal in light of continuing risks from the novel coronavirus.

3:40 a.m. U.S. President Donald Trump hopes to invite Russia, South Korea, Australia and India to the next Group of Seven summit, signaling his desire to find partners as he blames China for the novel coronavirus pandemic. Trump said that he will postpone the G-7 summit from June to September.

9:00 p.m. Sri Lanka plans to reopen its tourism sector in mid-June by allowing only small groups of visitors to begin with, a local newspaper quoted a senior tourism ministry official as saying.

7:30 p.m. Thailand’s House of Representatives passes a 1.9 trillion baht ($59.8 billion) support package to ease the impact of the coronavirus. The legislation, comprising three bills, needs approval from the Senate, which is expected to convene in early June, before it can become law.

10:52 a.m. China confirms two new infections, down from four the day before, lifting the total number of recorded cases in the mainland to 83,001. With no new fatalities reported, the death toll remains at 4,634.

9:11 a.m. Brazil’s Health Ministry says the coronavirus death toll has risen to 28,834, with 956 fatalities in the past 24 hours. The South American country surpasses France, with only the U.S., Britain and Italy reporting more deaths. The number of infections in Brazil reaches 498,440, with a daily record of 33,274 new cases reported.

12:14 a.m. Austria’s health ministry gives the green light for two Formula One motor races on July 5 and 12 — the delayed season-openers — to be held without spectators, Reuters reports.

11:15 a.m. Japan’s health ministry postpones the approval of Avigan, a candidate drug for treating coronavirus infections, until June or later. The delay dashes the hopes of many, including Prime Minister Shinzo Abe, who previously said that he “will aim for approval by the end of May.”

11:00 a.m. China records four new cases of coronavirus as of the end of Friday, compared with zero the day before. All of the cases were imported. The country also confirms four new asymptomatic cases, versus five the day before. With no new fatalities reported, the death toll remains at 4,634.

7:00 a.m. Japan’s largest diagnostic companies will step up to help the country in its lagging coronavirus testing effort by tripling their combined capacity to roughly 10,000 daily before summer’s end.

6:15 a.m. A record 5.97 million Japanese people, or about 9% of the nation’s entire workforce, were employed but not working last month, official data shows.

5:23 a.m. U.S. stocks end the final trading day of May with mixed results. The Dow Jones Industrial Average falls almost 0.1%, paring its losses after President Donald Trump’s news conference on China, in which he announced less drastic measures than some had expected. The S&P 500 rises about 0.5%.

3:52 a.m. The U.S. will “terminate” its relationship with the World Health Organization and roll back preferential treatment for Hong Kong, President Donald Trump says at a news conference. Trump claims the WHO is under China’s “total control.”